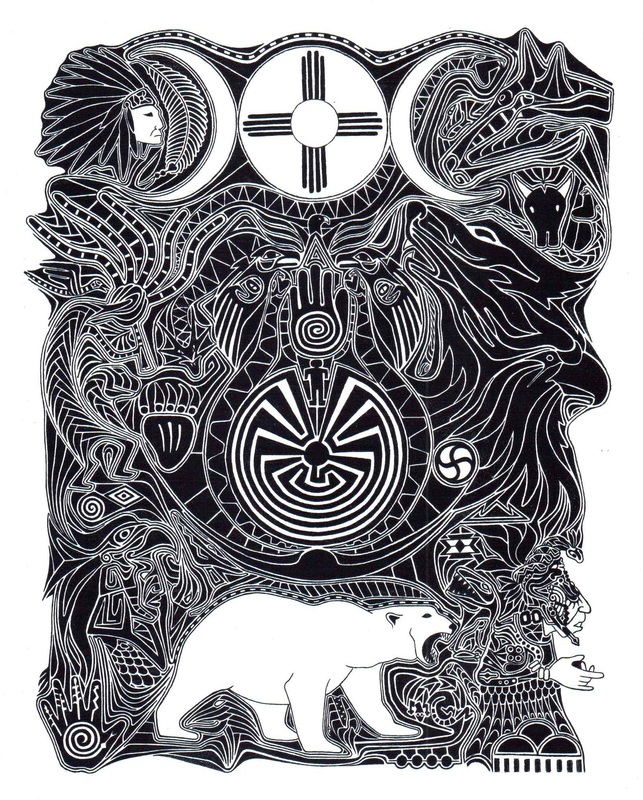 During the most recent Ice Age, an undersea ridge between Siberia and Alaska emerged from the sea. Known as the Bering Land Bridge, it developed a steppe-like grassland ecology and was grazed upon by large animals such as horses, reindeer, and mammoths. Gradually Ice Age hunter-gatherers of the Siberian steppes pursued their prey across the land bridge and into the America's. When the melting glaciers submerged the land bridge about 10,000 years ago these Asians became isolated and became indeed the First People of the Americas. These First Americans gradually made their way east and south, spreading throughout North and South America. Living at the mercy of nature, Native Americans developed a strong spiritual connection with their natural environment. The spiritual goal of the Native Americans is to live in harmony with the universe. Native American theology is rich in symbolism and it is this symbolism that is the subject of this drawing. A totem is a spirit being, sacred object, or symbol that serves as an emblem and spiritually represents a group of people such as a family, clan, lineage, or tribe. Many tribes believe that each person has an animal totem that is a spirit guide that sometimes appears in dreams or in Vision Quests and walks through life with them, teaching, guiding and protecting. Like my drawing of the Unicorn, this drawing is done in reverse. Meaning all of the Dark Designs are hidden in the blackness of the night sky while your focus is drawn to the brilliantly white polar bear and moon. Both the bear and the moon are Native American Totems. The polar bear is the largest carnivore on four feet, symbolizing power, and it is considered to be a brother of the First People as well as being the favorite subject for native artists. The Moon is a symbolic representation of the Maiden, Mother and Crone, symbolizing the stages of life of a woman. In all, there are forty five Dark Designs hidden within the drawing, some are quite obvious where as others will be harder to find. Like the hummingbird that symbolizes peace, healing and joy, and the butterfly symbolizing hope and new beginnings. The Thunderbird is centrally located as it is the most powerful of all of the mythical creatures and symbolizes personal power and a link to the spirit world. Just below is the man in the maze which symbolizes a persons journey, thus becomes the symbol for life. Look into the darkness and see how many more Totems of the First People you can find - happy hunting!
Drawing, Designs, Pen and Ink, Images, Black and White, Illustrations, Sketches, Doodles, Dark Designs, Art, Bowling Green, hidden images, Angel, Dragon, Hydra, Tree of Life, Cat, Eagle, Wolf, Elephant, Saber Tooth, Siren, Mermaid, Minotaur, Medusa, Falcon, Panther, Unicorn, Lion, Hummingbird, Werewolf, Frog, Lizard