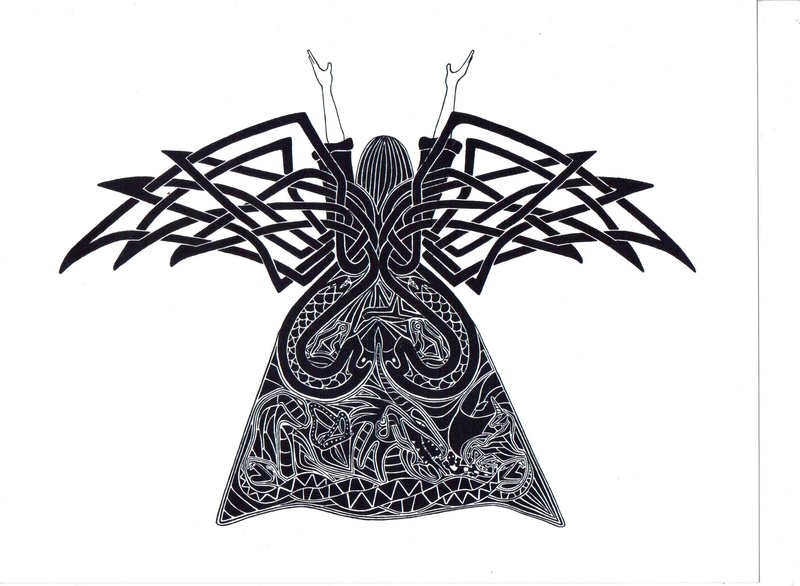 This drawing obviously depicts an angel - it is the wing design that makes it Celtic. The intricate pattern of intersecting lines create an interesting Celtic designs. In general, angels are supernatural beings or spirits, usually humanoid in form, and are found in various religions and mythologies. They are often depicted as benevolent celestial beings who act as intermediaries between Heaven and Earth or as guardian spirits or as a guiding influence. It is believed that angels protect and guide humans as they carry our God's tasks. In surveys taken in the United Kingdom and United States, as high as 78 percent responded that they had personally seen, been touched, guided or protected by an angel. Artists often depict angels with wings and a halo, robes and various forms of glowing light. Angels are found in Christianity, Judaism, Islam, Zoroastrianism, Sikhism, and Hinduism as well as other religions. In Jewish and Christian traditions, belief in angels goes as far back as the Book of Genesis. According to Jewish tradition, an angel is a spiritual being and does not have any physical characteristics. The first angels mentioned by name in the Bible are Gabriel and Michael. An important rank of angels are Archangels. The term or prefix "arch" is Greek for "Ruling" or "Chief". Archangels are only mentioned twice in the Bible and only Michael is called an Archangel. Although angels are mentioned over 300 times in the Bible, the Archangel Michael is one of only three named angels, the others being Gabriel and Lucifer (Satan). Michael is referred to as "the great prince" and "leader of other angels". It was Michael who fought with and threw Lucifer out of Heaven when he revolted against God. In Islam, Michael is known as Mikail and the Koran says that he sheds tears over the sins of the faithful and these tears became the angels known as Cherubim. Gabriel is Gods special messenger. On several occasions in the Bible, Gabriel came to earth to give important announcements and tell of special events such as telling Mary that she would be the mother of Jesus, the King of the universe.
Drawing, Designs, Pen and Ink, Images, Black and White, Illustrations, Sketches, Doodles, Dark Designs, Art, Bowling Green, hidden images, Angel, Dragon, Hydra, Tree of Life, Cat, Eagle, Wolf, Elephant, Saber Tooth, Siren, Mermaid, Minotaur, Medusa, Falcon, Panther, Unicorn, Lion, Hummingbird, Werewolf, Frog, Lizard