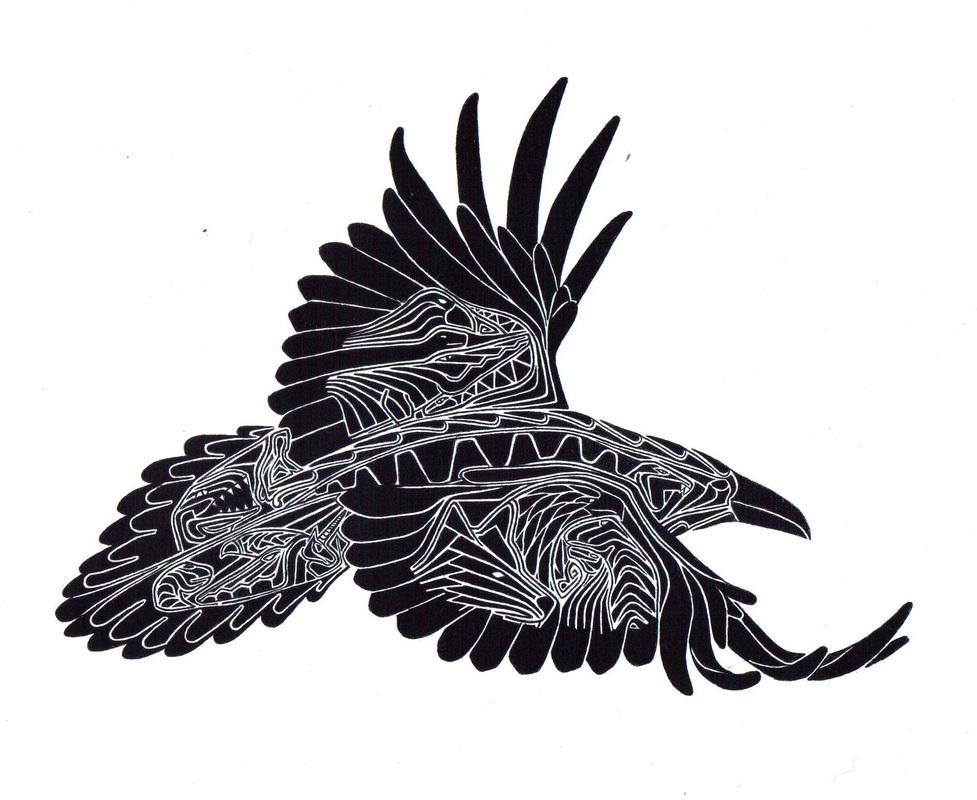 For centuries Ravens have held a special place in mythology, even today they exert a powerful hold over the psyche for a significant part of the population. Fascination with the Raven has persisted into modern times as evidenced by Edgar Allen Poe's literary classic and the film of James O'Brien's cult graphic novel "The Raven". In nearly all cultures, the raven was originally white. In Greek mythology Cronois, daughter of Phiegyes was pregnant by Apollo. Apollo left a white raven to watch over her, but just before the birth, Cronois married Ischys. When the white raven informed Apollo of this, Apollo killed Cronois and Ischys, and turned the raven black for being the bearer of bad news. Among the Northwest Coast tribes the raven is both hero and villain. The raven's character is very similar to that of the Coyote, both are driven by greed. Ravens for food and Coyotes for carnal pleasure. In the creation myths of the Northwest Coast  tribes the raven appears either as the actual creator or as having played a major role in the creation of the world. For example, one such creation myth describes how the raven stole the sun, the stars, the moon and fire and includes the almost universal tale of the Flood which brought about the end of the Age of Animals and began the Age of Men for which the raven is responsible. The raven is considered to be the greatest shape shifter of them all, being able to change into anyone or anything to get what he wants. In European mythology, the raven is almost always the messenger of the gods, and is usually associated with war and death. The associations is an obvious reflection of its tendency to eat carrion, plenty of which is found in the aftermath of a battle. This tendency led to the persecution of the raven as a harbinger of death and destruction and a connection with the Otherworld. The Raven was drawn at a request from my sister. I really don't know why I didn't draw one sooner, because it fits so well with my Pen and Ink style filled with hidden Dark Designs.
Drawing, Designs, Pen and Ink, Images, Black and White, Illustrations, Sketches, Doodles, Dark Designs, Art, Bowling Green, hidden images, Angel, Dragon, Hydra, Tree of Life, Cat, Eagle, Wolf, Elephant, Saber Tooth, Siren, Mermaid, Minotaur, Medusa, Falcon, Panther, Unicorn, Lion, Hummingbird, Werewolf, Frog, Lizard