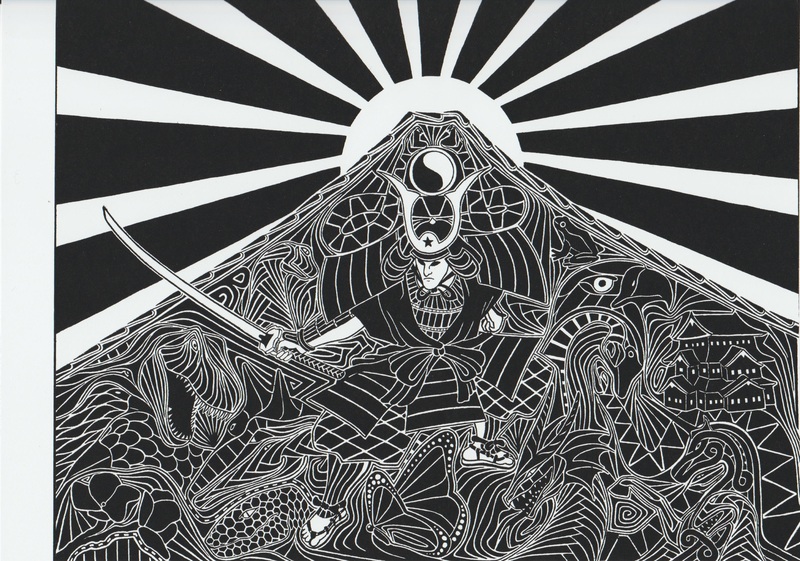 The samurai were members of a powerful military caste in feudal Japan. They rose to power in the 12th. century with the beginning of the countries first military dictatorship known as a shogunate. The word "samurai" roughly translates as "those who serve". Another general word for a warrior is "bushi", from which bushido is derived. Bushido, which means "way of the warrior" came to be the code of behavior for the samurai much like chivalry became the code of behavior for European knights. In general, the samurai were the feudal warriors of ancient Japan, they served the daimyos (great lords) and backed up the authority of the shogun (military leader) which gave him power over the Mikado (emperor). The katana (sword) held great significance in samurai culture. A man's honor was said to reside in his sword, and the craftsmanship of swords - including carefully hammered blades, gold and silver inlay, and shark skin handgrips - became an art in itself. The right to carry swords was restricted to only the samurai, and the samurai wore two - both a long and a short sword as a mark of his privilege. During most of the feudal period, Japan was in a near constant state of conflict between its feuding territorial clans until the Tokugawa Shogunate unified Japan in 1615. The Tokugawa Shogunate would bring about 250 years of peace prosperity and isolation. During this time period the samurai would dominate Japanese society until the Meiji Restoration of 1868 led to the abolition of the feudal system. Despite being deprived of their traditional privileges, many of the samurai would enter into the elite ranks of Japanese politics and industry. More importantly, the traditional samurai code of honor, discipline, and morality known as bushido was made the basic code of conduct for Japanese society. This drawing of the traditional samurai with his katana is combined with the spiritual images of Mt. Fuji and the Rising Sun in the modern Japanese flag. While your eyes are drawn to the dominate samurai, numerous Dark Designs are hidden in the shadows of Mt. Fuji.
Drawing, Designs, Pen and Ink, Images, Black and White, Illustrations, Sketches, Doodles, Dark Designs, Art, Bowling Green, hidden images, Angel, Dragon, Hydra, Tree of Life, Cat, Eagle, Wolf, Elephant, Saber Tooth, Siren, Mermaid, Minotaur, Medusa, Falcon, Panther, Unicorn, Lion, Hummingbird, Werewolf, Frog, Lizard