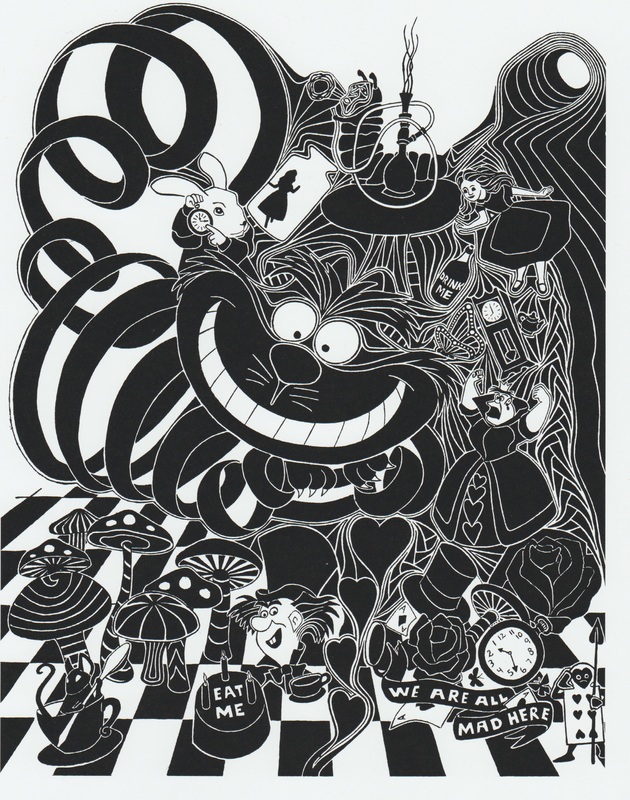 Alice's Adventures in Wonderland is an 1865 novel written by Charles Dodgson under the pseudonym Lewis Carroll. It is the story of a girl named Alice who falls through a rabbit hole into a fantasy world populated by peculiar characters. A timeless children's book, it was inspired by real events and a real child, Alice Liddell. The story was dreamt up on a summer's day river outing. As Dodgson and the Liddell family traveled downriver, he told the family a story about a bored little girl called Alice who goes looking for adventure. At the end of the day, Alice, the middle daughter and Dodgson's favorite, asked that the story be written down. Charles agreed and began the next day, it took two and a half years to complete. On the face of it, the story is an innocent light hearted children's story, however, it appears to have a darker side. For over 150 years the novel has been analyzed and speculated about. Many believe that the story is really about a young girl maturing away from home in a frightening world ruled by chaos. The theme with Alice growing and shrinking is viewed by some as representative of the ups and downs of adolescence. Others see this in conjunction with the "drink me" bottle and "eat me" cakes, as evidence of drug use. The use of opium was both legal and readily available in Dodgsons day and from that day to this many believe that drugs influenced the writing of Alice in Wonderland. (a notable example is the song White Rabbit by Jefferson Airplane) While much has been made of the use of drugs, the truth is no evidence has been found that positively linked Dodgson to drug abuse. On the other hand, some claim that the fifth chapter with the hookah smoking Blue Caterpillar is about drugs, especially when the Caterpillar advises Alice to eat from the mushroom. And finally, there is a darker theme which speculates about Charles Dodgson's relationship with Alice Liddell. She was his favorite of the three Liddell girls and he wrote numerous letters to her. In 1862 Dodgson wrote in his diary about the break up with the Liddell family, followed by three missing pages. Researchers and letters from the Liddell archives have suggested that Dodgson may have proposed to Alice but was rejected and banned from visiting, later letters suggest that he was actually courting Ina (Lorina - Alice's sister). Mrs. Liddell burned all of Dodgson's letters and this combined with the three missing diary pages will keep the truth shrouded in mystery.
Drawing, Designs, Pen and Ink, Images, Black and White, Illustrations, Sketches, Doodles, Dark Designs, Art, Bowling Green, hidden images, Angel, Dragon, Hydra, Tree of Life, Cat, Eagle, Wolf, Elephant, Saber Tooth, Siren, Mermaid, Minotaur, Medusa, Falcon, Panther, Unicorn, Lion, Hummingbird, Werewolf, Frog, Lizard