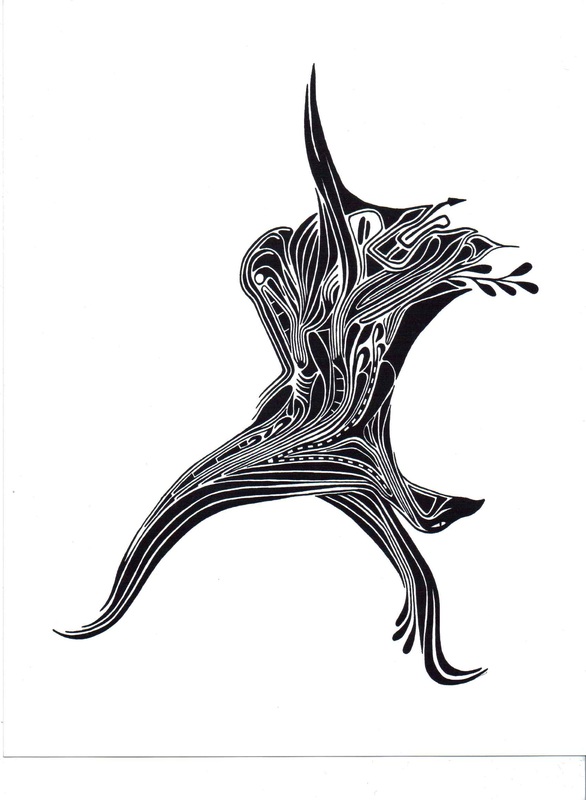 This is one of my abstract drawings that did not start out to be anything at all. It is a series of free flowing lings that took on a life of its own and when viewed in one orientation resembles a demon and when turned upside down resembles a phoenix rising from the flames.  The word demon comes from the Greek word daimon and refers to a spirit or divine power. The term first acquired its negative connotations in the ancient Hebrew writings. The western conception of a demon is strongly influenced by these early Hebrew writings. During Biblical times, mental disorders were believed to be caused by demonic possession. The supposed existence of demons is an important concept in many modern religions, and demons are still feared as a popular superstition largely due to their alleged power to possess the living. Which helps to explain in part the popularity of possession in so many of today's movies. Artists often depict demons and Satan as red creatures with horns, a tail, reptilian eyes and cloven hooves - a description first provided by Albrect Durer, a German printer who was asked to provide images in the first published image of Satan during the European Renaissance period.
​The phoenix is a bird with brightly colored plumage, which after a long life, dies in a fire of it's own making, only to rise again from the ashes representing a cyclical process of life from death. Because it is reborn from its own death, the phoenix took on the characteristics of regeneration and immortality. The phoenix was found in the mythologies of several early societies, most notably the ancient Egyptians, Hebrew, Romans and Greeks. The phoenix became a symbol of Christianity in early literature. The phoenix's resurrection for death as new and pure was viewed as a metaphor for the resurrection of Jesus - a belief central to Christianity. The phoenix expresses an enduring sense of hope and redemption, and is an important symbol today, used as a name for sports teams, buildings and even cities.
Drawing, Designs, Pen and Ink, Images, Black and White, Illustrations, Sketches, Doodles, Dark Designs, Art, Bowling Green, hidden images, Angel, Dragon, Hydra, Tree of Life, Cat, Eagle, Wolf, Elephant, Saber Tooth, Siren, Mermaid, Minotaur, Medusa, Falcon, Panther, Unicorn, Lion, Hummingbird, Werewolf, Frog, Lizard