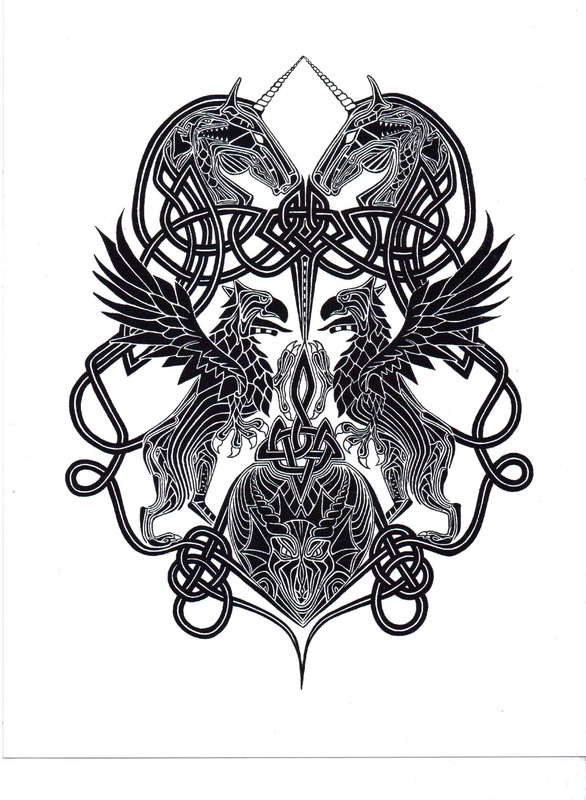 The Celtic Coat of Arms is the result of a request from a man at one of my art shows. After checking out my Dark Designs, he asked if I had any Celtic designs? I replied no but I soon will - so as soon as the show was over and I got back home - I began to research and doodle and after several false starts this is the result - a drawing containing two unicorns, two griffins and a dragon, all tied together with interconnected ​Celtic knots. In addition, as is my style, I have hidden fourteen other Dark Designs with the body of the drawing. In terms of symbolism - the unicorn is one of the very few mythological creatures that are considered to be beneficial in almost all traditions. The traditional depiction of unicorns included a billy goats beard, a lions tail and cloven hoofs. The unicorn is referred to numerous time in the Bible and was also quite prominent in heraldic symbolism. The Celtic griffin is a symbol of duality combining the symbolism of the eagle and the lion. This duality is reflected in its dual physical form as well as in its expression of both positive and negative qualities. If used for good, the griffins are the protectors of life, guardians of nobility, gentleness and justice. However, if misused or invoked for selfish reasons, the griffin brings about gluttony, vengeance, and violence. In many cultures dragons are viewed as representing the primal forces in nature and the universe. They are believed to be both creators and destroyers. In the Orient, dragons are associated with wisdom and longevity. They usually possess some form of magic or supernatural power. Chinese dragons tend to be benevolent where as European dragons are often malevolent. Dragons have captured the imagination of man since earliest times and they continue to be one of the most complex and universal symbols on earth.
Drawing, Designs, Pen and Ink, Images, Black and White, Illustrations, Sketches, Doodles, Dark Designs, Art, Bowling Green, hidden images, Angel, Dragon, Hydra, Tree of Life, Cat, Eagle, Wolf, Elephant, Saber Tooth, Siren, Mermaid, Minotaur, Medusa, Falcon, Panther, Unicorn, Lion, Hummingbird, Werewolf, Frog, Lizard